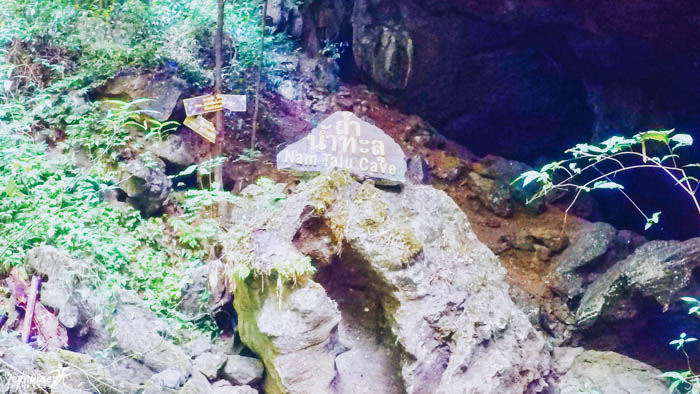 Nam Talu Cave is located in Khao Sok National Park in Thailand and can be accessed from Cheow Lan Lake by longboat.   There are many caves that can be explored in the Cheow Lan Lake area but you cannot access them in the rainy season.  Flash floods cause the caves to fill up quickly and have caused fatalities.  Going with a registered and qualified guide is the best way to walk through the system safely.

Scott and I had booked onto a 1.5 day, 1 night excursion on Cheow Lan Lake.  The schedule included two safari’s, a hike through a cave and a night sleeping in a floating bungalow.  When we had booked the excursion we were informed that the hiking was weather dependent.  We would hike but it may not be possible to walk inside the cave system.

We were in Thailand in December and during that time we had received a lot of heavy rain.  We did not think that going through Nam Talu cave was going to be an option for us.   To our surprise, the guide informed us that the weather had been good and we might be able to explore the full cave system.

Excited about this, not only were we getting a hike on a track in the national park but we were also going caving!  We had never done anything like this before so we were happy to be sharing this new experience together.

What You Need to Take to Nam Talu Cave

We were advised that the following items should be taken on the hike / Nam Talu cave experience…. I would definitely express the importance of a good pair of shoes.  The track gets extremely wet and muddy and you will need to have something sturdy.  Shoes that will not fall off and are comfortable on your feet for when you are in the cave.

The hostel we were staying at in Khao Sok National Park helped us organise the equipment.   You may find that this may be the case for you too.  Ask before you leave and see what equipment they have available…. However, if you borrow shoes, make sure you take your time and pick a decent pair 😉

You can also arrange clog-like shoes, a headlamp and dry bag at the floating resort.  The fee to rent is 50 Baht per item.

We took the longboat from the floating bungalows to the entrance of the path.  This is where the Nam Talu cave sign was.  Two guides came with us; one was at the front leading the group and other was at the back.

The path up to Nam Talu cave was about an hour walk.  It was relatively flat but it was sludgy, wet and slippery.  You had to take time in parts to avoid falling flat on your face or on your bum.    Some people wore sandals or what the guide called “shopping shoes”, and they did not do too well….. They had no grip, they would slip over and the shoes came off as we went through deep sticky mud sections.

There were parts of the path where you had to pass through rivers to get to the other side.  The deepest we got up to was just above our knees and was not too taxing.  If the rain fall had been heavier I could imagine that it would have been a bit more intense.

We had to take the clothes off that we didn’t want to get wet and leave them behind.  This was for the last part of the walk, continuing along the path in our bikinis and swim shorts took a further 10 minutes. Tackling tree obstacles along the way.

By the time we had reached Nam Talu cave a few of us found a couple of leeches on our legs and on our ankles.  To some of us it was no big deal.  However,  there is always the odd one that has to make a fuss.  We had to remove the leeches by hand and then we continued along the track.  When we got to the cave entrance we sat down and did a more thorough check around the ankles.

Now, this is where Scott’s shoes finally gave up on him.  The shoes that he had borrowed from our hostel decided to come apart at the bottom.  By the time we had got to the cave entrance both soles had dropped off.  This was quite amusing at the time  but in reality it was going to make caving a lot harder for him. 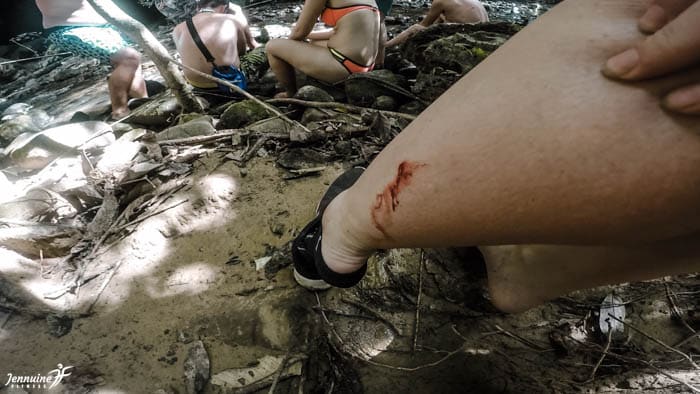 The entrance was big to start with and the river was low but it got dark quite quickly.  It was difficult to see your footing even though we all had head lamps.  You still had to pay attention to where you were treading as the rocks were uneven to avoid slipping over.

There was a big stalagmite overhang as soon as you entered the first part of the cave.  When you slowed down and looked at the surroundings you could see Stalagmites and Stalactites on the rocks.  They were hanging from the cave ceiling.   It was dark and you had to stop and stare with the light from your headlamp to see them.  We were with a big group so it was hard to stop and observe the surroundings.  I think people were more concerned about sticking together and not getting lost. 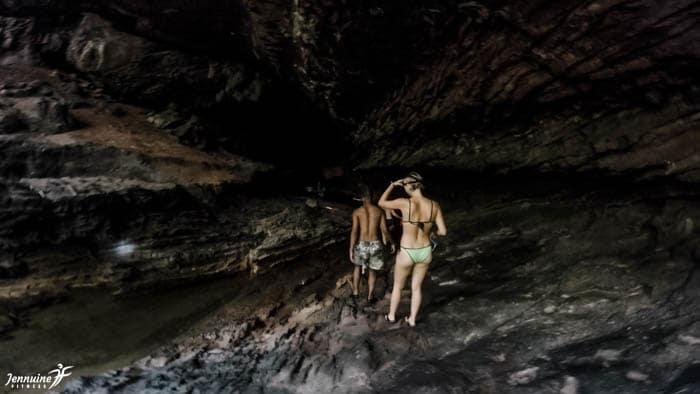 The running water through the cave started to get deeper and more exciting as we ventured through, going from our calves to our waist.  Then we hit a point where you had to swim, the cave was narrow and you literally had to throw yourself in and swim until you made it to the shallower part on the other side.

The cave then got really small with a lot more water and it was a lot rockier.  I found it thrilling and a bit nerve racking and I could see why the cave was dangerous if it was raining outside.  Some parts were really narrow, the water was deep where you had to swim.  There was also no way of getting out if you were suddenly hit by a flash flood. 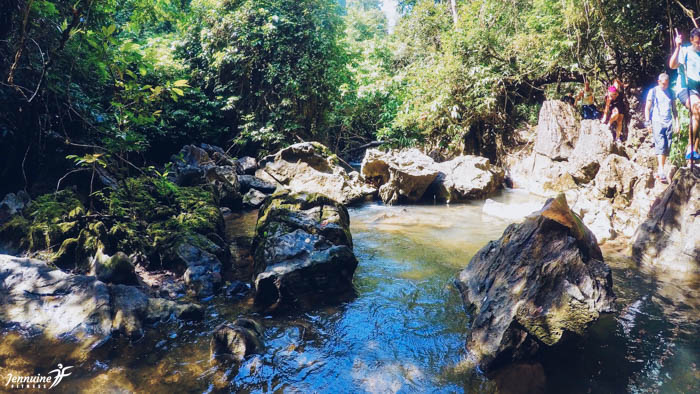 In addition, the water was beginning to flow through the cave more rapidly and I was beginning to get worried.  Scott and I were at the back and I was feeling nervous being out of my depth and Scott was feeling uneasy because his shoes were useless.  On the other hand the guide at the back with us was confident as he waited for us to join the group.  We had no need to worry but this is generally what happens when you do something new.

Low and behold, when we ventured outside it was raining.  The guide then informed us that he had lost quite a few of his friends in Tam Nalu cave over the years from flash floods.  From our experience in the cave I can see why and I’m thankful that he wasn’t so generous with his past experiences before we entered.  I later read online that quite a few fatalities have occurred in the cave with tourists as well. 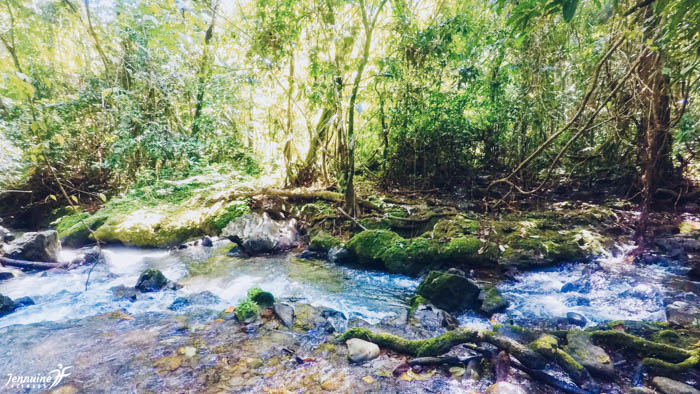 My Thoughts On Nam Talu Cave

Nam Tulu Cave was definitely a really cool excursion.  We may have felt a little overwhelmed at times and the group was quite large but we enjoyed the experience.

Caving is an activity that we would definitely do again.  Next time with better shoes (our own equipment) and hopefully a smaller group so we could slow down, observe the rock formations and take some better photos.

I hope you liked this post. I love to hear from you so if you have any remarks or questions then please feel free to drop them into the comments box below. Thanks!

for more updates and inspiration